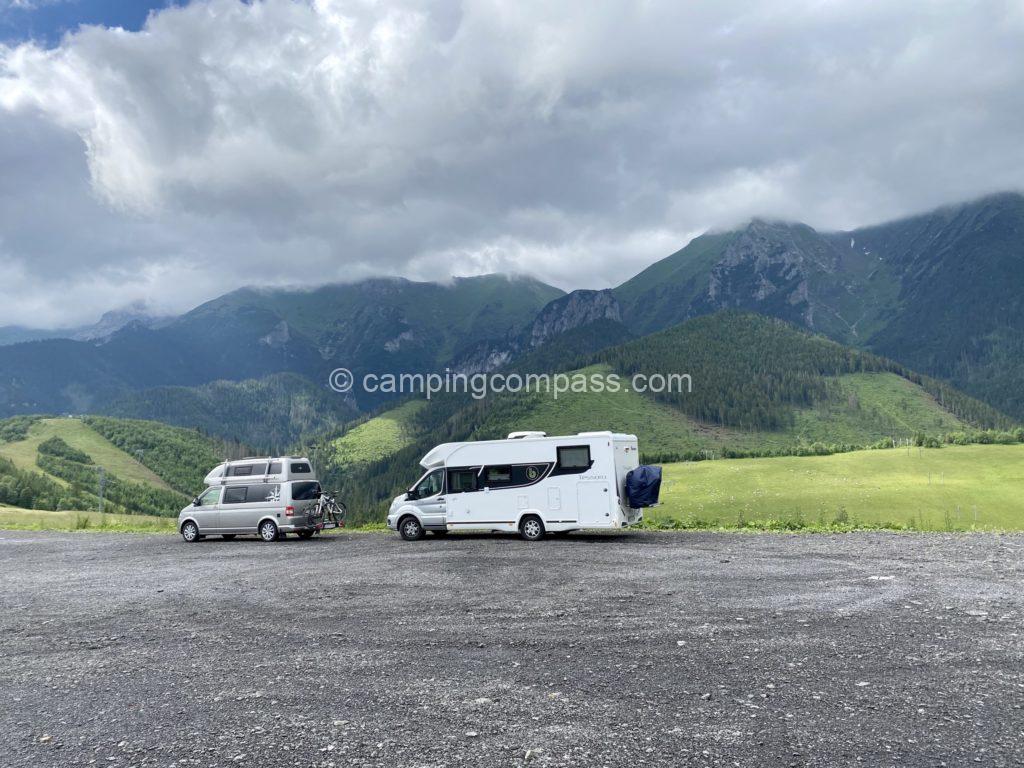 I’m sure you’ve noticed that I call everything a caravan. I quite like it that way, and I’m not going to lie, it’s easier for me that way. After all, there’s only one caravanning too. We don’t call this hobby RVing or motorhoming.

So it makes no difference to me whether you travel by motorhome, camper van or caravan. Each alternative has its pros and cons, better said you are making different trade-offs.

“Caravanning is about compromises”

It’s up to you what compromises you are willing to make.

It wasn’t that long ago when motorhomes were quite a rarity in our country. When we came back from holiday, we often felt that they were as unpopular as red socks. Abroad, it was the exact opposite. Germans, Dutch, Italians, French. Caravanning has been going on for decades and it is as normal as a cottage, a cabin or a garden in our country.

Caravans are the most common way of caravanning. They are made using the chassis and cab of a truck such as a Fiat, Ford or Mercedes and the living area is made by a caravan factory.

They are relatively manoeuvrable, relatively easy to park and spacious enough. Motorhomes used to be quite short and handy. Over time, however, they are making them bigger and clumsier. I don’t know why. With a small car, it was necessary for the manufacturer to have thought well about every inch and millimeter of interior space. One thing had multiple functions. A folding bed. Fold out seating from a table and the like. Such older motorhomes were easily 5.5m in length and comfortably carried 5 people. Today, a motorhome designed for four people is at least 7m. And it’s quite a difference to park a 5.5m and a 7m car on a street somewhere in Spain.

Motorhomes are divided into 3 types: semi-integrated, integrated and alcoves.

A semi-integrated motorhome has a classic metal cabin in the front. This cabin is passable to the rear of the caravan. The rear part is extended and made of ultra-light but strong polystyrene, which has quite good insulating properties. The surface of the polystyrene wall is either aluminium, fibreglass or plastic.

The integrated motorhome looks like a bus or a caravan from Breaking Bad. Therefore, it does not have a metal cabin in the front, but the whole caravan is made of polystyrene. This has its huge advantages but also huge disadvantages. The advantages certainly include the interior space and the insulating properties of the one-piece polystyrene body. The disadvantages include the higher cost and expensive repair in the event of an accident, or even just replacing a substandard windshield when cracked by a mere pebble, and the drivability.

Alcoves are in some ways similar to semi-integrated motorhomes. An alcove car has a sleeping area above the cab, mostly for two people. The disadvantages of an alcove are the rather high height, the driving characteristics and the higher consumption when travelling.

In Europe, almost all caravans are currently built on Fiats. It’s a relatively inexpensive base. You can get service anywhere and spare parts are in stock. Apart from Fiat, you can also caravan in a Ford, Mercedes, Iveco or Renault. More luxurious integrated caravans use trucks like Man or Iveco as their base. Caravans are also produced on the Volkswagen Crafter.

Personally, we have many years of experience with the Fiat Ducato and VW Transporter

“Driving a Volkswagen is several grades better, more comfortable and especially quieter than driving a Fiat. However, I don’t think the Volkswagen is a better quality and less perishable car than the Fiat.”

Premium brands are also made on Mercedes, but I’ve never owned one and so can’t comment on that. However, the cockpit interior on the Mercedes does resemble a 60k car, the cockpit in the Fiat certainly does not

Spare parts and service is obviously cheaper on a Fiat than on a Volkswagen or Mercedes.

Caravan Fiats are geared to slow from the factory, so at highway speeds the engine and the whole cabin hums quite a bit. Travelling in a Ducat is certainly not the same as travelling in an X5..

Mercedes motorhomes are almost all made with automatic transmissions. I’ve also encountered a usable automatic on Fords as well.

Motorhome length ranges from about 5.5m to about 10m. The most standard width is 2.3m. There are also compact models with a width of about 2.1m, which are easier to park and also to drive. However, the narrowed width is at the expense of interior space.

The height of the caravan ranges from 2.6m to 3.2m, so special care should be taken with low driveways or tree branches.

Length, width and ultimately type are still about certain compromises. Every caravanner caravans differently, goes to different places and has different requirements. That’s why there are not 1000 but 1200 models.

Whether you opt for a Fiat, Ford, Renault, Iveco Mercedes or Volkwagen is up to you. Each make and model has its pros and cons and each caravanner has different expectations of a caravan.

We, after four years of travelling with a semi-integrated Knaus on a Fiat, decided to make a change. We chose a camper van on a Volkswagen Transporter. It’s smaller, more manoeuvrable, more comfortable and it’s a four-wheeler. It’s almost as easy to drive and park as an SUV, but the downside is less interior space.

Vanlife is breaking the internets with the advent of Instagram. The vans are small, stackable and handy. Every brand already has a number of camper vans on offer. In the past, campervans without built-in showers were called campervans. The most widespread were from Westfalia at Volkswagen.

A couple of years ago, the Fiat Ducato camper vans started to proliferate quite considerably. The Fiat is made in 4 sizes, from 5m to 6.4m. Different heights are also available. Some companies also make camper vans on Mercedes, Renault, Peugeot or Citroen.

In general, we can divide camper vans into 2 types: smaller vans without bathroom, or campervans, and larger vans with bathroom .

Campervans are the aforementioned vans such as the VW California, Mercedes Marco Polo or Pössl Campster. These 3 models have a lifting canvas roof and are among the greatest classics of camper vans. They drive almost like SUVs, park almost like SUVs, are quiet and practical for everyday use.

“If I didn’t have a station wagon and only had to own one car, I’d buy a California or a Marco Polo”

Campervans can also have a fixed raised roof. The latter has its advantages and disadvantages. Advantages certainly include excellent sound and thermal insulation and plenty of interior space when camping. Examples of such vans are the Westfalia Nugget, Westfalia Club Joker, Fischer Reisemobile and other smaller brands.

The bed in a campervan is usually the length of the car, it can sleep a person who is over 190cm. This is one of the reasons why we bought the Westfalia Club Joker, the bed is even 210cm, which is really rare in campervans.

The bed in campervans is usually the width of the van. If you’re over 190 cm, you won’t sleep on it. You just won’t fit the length. On the longest van, the Fiat Ducato, which is 6.4m long, they also make interior versions with beds the length of the van. For one year Knaus also made a 6m van with longitudinal beds.

“It is therefore ideal to see the van in person and test it out.”

As I’ve written before with motorhomes – it’s all about compromises and owner preference. There is no better or worse type of motorhome.

A caravan is, simplistically, a huge motorhome behind a car. Inside a caravan is everything that is in a motorhome. That is, except for a cab to drive in. And that removable cab is why people either want a motorhome or they don’t. Basically, a motorhome has a lot of advantages and a lot of disadvantages. It’s about 50/50.

The advantage of a motorhome is that you travel in the comfort of your car. Your car is available for trips after you park the trailer. Caravans are also much cheaper than motorhomes.

The downside of a trailer is that you’ll only drive the trailer to the campsite, the maximum cruising speed is up to 100km/h and you won’t park it anywhere. Driving a car with a motorhome is definitely more strenuous than travelling in a campervan. The trailer is wide and together with the car you measure about 10 metres. You have to be very careful about crosswinds and especially where you turn.

I don’t think I’ve ever seen anyone with a motorhome sleep anywhere other than a campsite. So if you buy or rent a trailer, you’re very likely going to want to go to the campground every night to unpark. The total “camping” of a trailer usually takes longer than just parking a camper or van. That’s why people with RVs stay in one spot for days.

The trailer classics certainly include the luxurious American Airstream, but it is priced above the cost of a standard motorhome. Almost all European brands of caravan manufacturers such as Hymer, Knaus, Hobby or Adria also offer motorhomes. There are also caravan companies that explicitly specialise only in the manufacture of caravans. These include Fendt, T@B or the aforementioned Airstream.

Although this manual is mainly aimed at motorhomes and camper vans, much of the following information can also be used when buying, renting or travelling with a motorhome.