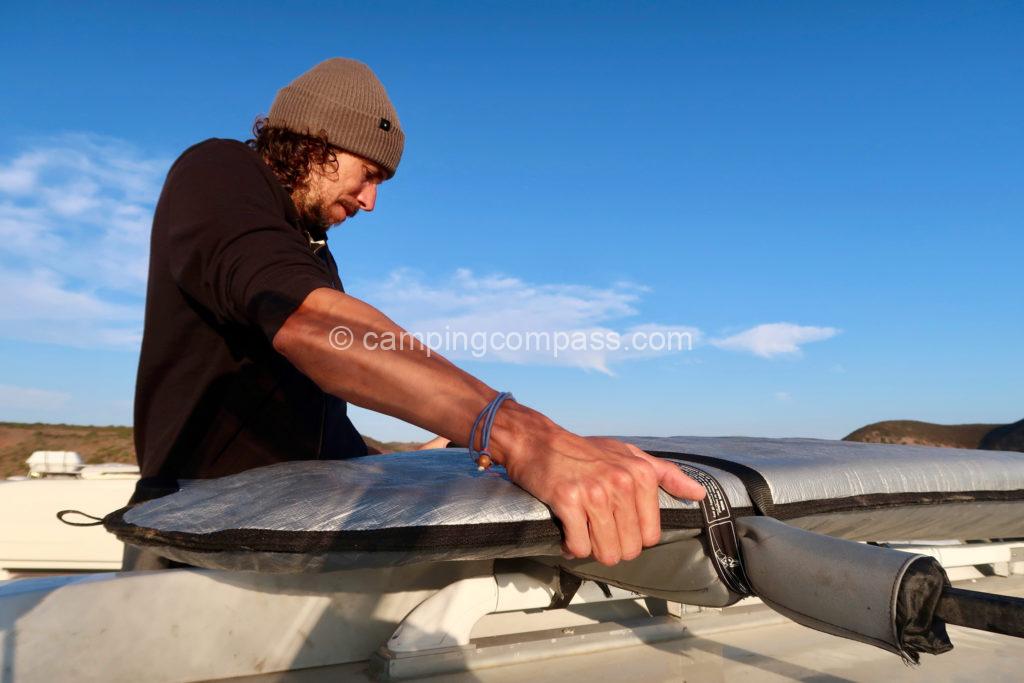 A caravan is like a hut on wheels. Inside it has shelving, cupboards with hangers and a relatively spacious fridge. The first caravan we had was a six-metre Knaus semi-integrator, which had a pretty decent sized garage in addition to a million cupboards.

The garage, that’s a big storage room that you can go into from the outside of the caravan. Sometimes the garage has two doors, sometimes three, but sometimes only one – which is a pretty seriously stupid contraption. Imagine you want to find, say, a barbecue at the end where you don’t have a door. You don’t stand a chance. You’ll find it before winter when you’re trying to store snow chains, which you won’t find until before summer for a change.

Bicycles, camping furniture, paddleboards and even shorter surfboards or a smaller kayak will fit comfortably in the garage. There is almost always a large bed above the garage. Either the width or the length of the caravan. Some garages have variable interior space. This means that the bed raises or lowers in height. It’s a pretty good contraption, except that the lifting marvel must weigh at least 100kg. But we’ll talk more about the caravan’s endorsement later.

You can equip your garage with a shelving system that costs at least 1,000 euros, or make something simple and functional out of stuff you find in a DIY store. For example, I made a double floor, shelves and some poles to hang, for example, a wetsuit, in my garage. We could fit our skis under the double floor and everything had room that way. So we could easily carry skis, bikes, some back-up water flasks, for example, in the garage at the same time, and it wasn’t a mess.

In addition to the garage, it is also possible to mount an outdoor bike rack, a motorcycle rack or a classic garden on the roof of the caravan. So you can put a ski box on the roof, a box for surfboards or cross racks on which you can attach surfboards, windsurfs or kayaks. Of course, every thing on the roof increases the height, so it’s good to think about that.

You’re bound to forget your height in some narrow lane with a suspicious bridge approaching.

You can either climb to the roof of the caravan with a folding ladder that you leave in the garage, or you can fit a permanent ladder at the back of the caravan. I recommend sticking a skate grip on the rungs of the ladder, it won’t slip off in the rain. I used to climb on the roof while still wearing a wetsuit and I was left with a puddle under the ladder.

Almost every caravan has small lockers and one big one for hanging stuff. Even a small campervan like a VW California or a Mercedes Marco Polo. You can hang shirts in the closet, for example, to be handsome on spaghetti and ketchup.

“Basically: the less stuff you take, the better”

This is especially true for clothes. We make a habit of packing our clothes in those ziplock bags. It’s quite practical. In one there are socks, in another T-shirts and so on. All in all, even on a long trip, we pack for like 2 weeks. So socks for 2 weeks and thongs for 2 weeks.

Almost everywhere there are coin-operated laundries with dryers. Laundries are in campsites or even in towns or small villages. Most of the time we can fit 2 weeks worth of clothes, including towels and bed sheets, into two washers. While it’s being washed you can go for coffee or spaghetti and ketchup.

Unless you have a special allergy, take as little food as possible. Shopping local is fun. You get to visit new places, meet new people, not really know what to buy and try new things. Except for Scandinavia and Switzerland, food in Europe is as expensive or cheaper than here and usually several times better quality. The same goes for beer or wine.

You can store food in the fridge, outside the fridge or even in the garage. Some large double-floored caravans have special storage compartments in the floor. For example, for a case of beer or mineral water.