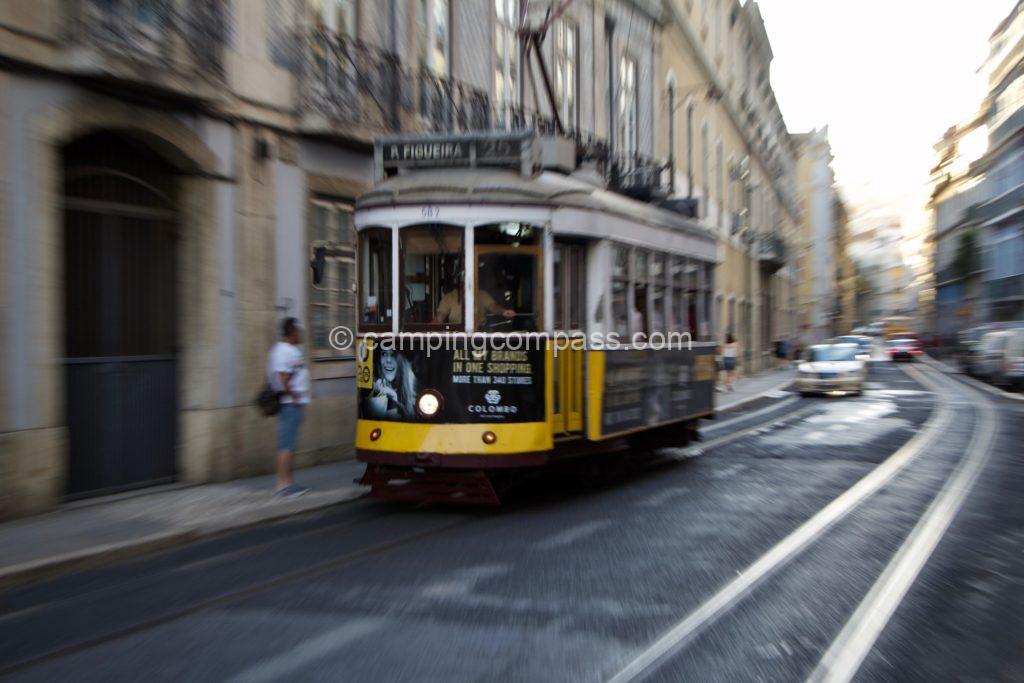 Lisbon is such a special city. We had the feeling that there were quite a few “normal” people living in the city centre. All we saw in the center were tourists or various strange touts. Maybe we are wrong, maybe that has changed since then. In France, Spain or Italy it is common to see normal people living in the city centre. They go shopping, to work, to a cafe or to a restaurant. However, in the centre of Lisbon there were quite a lot of semi-dilapidated buildings and we had the feeling that the locals only came to the centre from somewhere in the suburbs.

Would we come to Lisbon again?

Lisbon had a very strange effect on us. Especially after being in France and Spain for a long time. The city centre is crammed with tourists. The city has a vibe of its own, it’s definitely worth checking out one day. Among other things, you just don’t see the Golden Gate in Europe ?

Where we slept in Lisbon with the caravan

We stayed in Lisbon in 2017. It was still possible in Portugal to sleep in a caravan or van anywhere in a parking lot or in the city. As of 2021, this is now banned throughout Portugal. To make sure this is not the case across Europe, please see this article on how and why caravanners (level expert) behave.

As parking was hassle free, we slept a little further away from the centre. However, we were about 2 stops by public train or a longer walk to the centre. The town is pretty much on a hill, so not much for longboarding. Probably not much for a bike either, especially when it’s 30 degrees or more outside.

The only place to sleep in Lisbon at the moment is probably in a campsite.

An old factory converted into a hipster leisure centre

A perfect project close to the centre. An old, dysfunctional factory has been converted into a place for coworking, cafes, restaurants, studios or shops selling handmade things. There are also exhibitions taking place there, one of which we visited. Super vibe, it’s worth going there at least for a coffee, or to buy some gift that wasn’t made in China.

There is a trend in several cities to convert old run-down markets into some kind of food hall restaurants. How does it work? It’s like a kind of permanent foodie fest. The restaurants have their own booths where they offer a few dishes. You pick whatever you want and eat it at a table like a school cafeteria. In addition, there are bars or little shops with different things, like 10 euro sardine tins. You can find this Time Out market on the map below. We visited the market just about every night, you can get a pretty decent meal there for less money than in a restaurant.

Pastéis de Belém is a bakery with traditional cakes since 1837. Like proper tourists, we queued for miles and paid triple the price. Not really worth it, you’re better off getting them somewhere in the centre at another bakery where you can normally sit down for a coffee and probably enjoy them more. If you do want to pop into the shora for scones, you can find the address on the map below.

The city centre is full of narrow streets with lots of bars. The classics are the old trams, which look very stylish. Keep an eye out, as they are quite stealing and especially ripping off tourists. I had a nicely dressed lady try to steal something from my pocket, but she came across a bag with nothing in it. When I smiled at her, she took off at the next stop. Somewhere we have her on video. ?

Portuguese seafarers in the 15th and 16th centuries successfully circumnavigated Africa to find a new trade route to India. In the museum there are models of various ships, some smaller and life-size. If this topic interests you, it’s worth a look.

If you like fish on a plate, go see what they look like before they throw them on the griddle. There are also sharks or penguins in the Oceanarium, for example. If I were to go back to Lisbon, I’d go see that Oceanarium again.

Map with interesting places in Lisbon