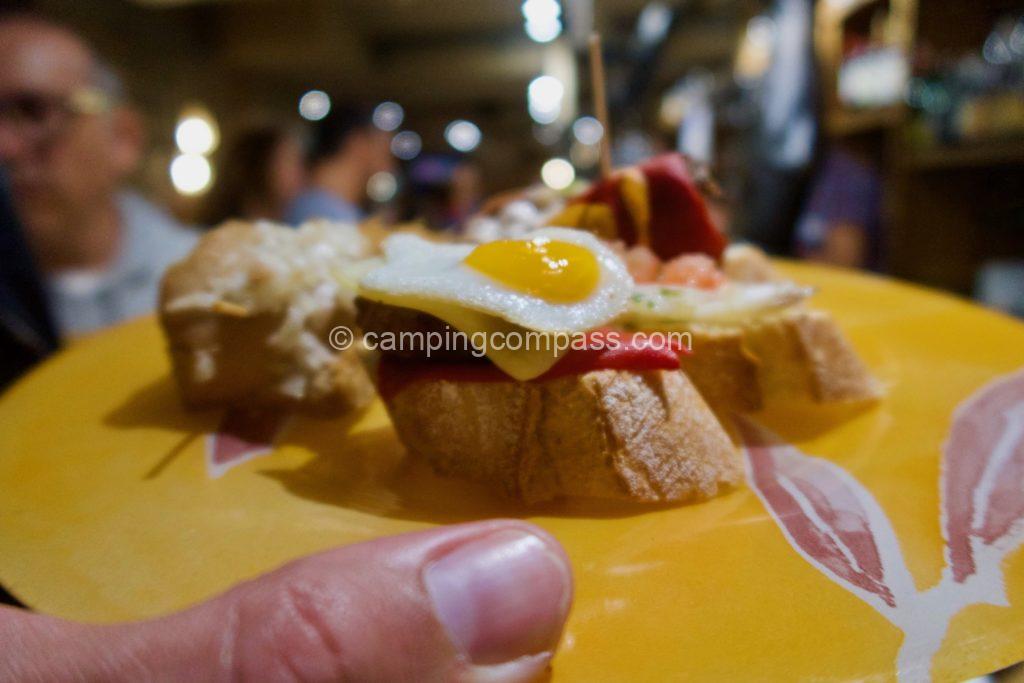 Everyone knows tapas. They are such micro dishes that are usually eaten in a bar, as an accompaniment to a drink. In the Basque Country, these tapas are called Pintxos in Basque. We followed the coastline from France on our way to see the waves. We spent a few days in the pretty little town of San Sebastián.

As you probably know, the Basque Country has its own language. Everywhere there are headings and names in Basque as well. It’s like the language of Asterix and Obelix ?

There is an official caravan park in San Sebastián, but it was completely full of caravans. And we were there at the beginning of September. So we parked almost right in the centre in the free car park. We had super access to both parts of town. The old town to the west and the newer part of town to the east.

The two bays of San Sebastian

A view of the western part of San Sebastian. On the left you can see the old town, which has stylish bars and restaurants. I recommend not eating for at least a day before visiting the town. The eastern part is a newer town with taller, modern buildings and a nice beach.

San Sebastian is the perfect place to live the surfer’s life. It’s the perfect size, flat city, so you can skate or longboard there. You surf right in town. The convenient beach and surrounding streets have an unreal vibe. There are cafes, bars, surf shops everywhere. People walking down the street in wetsuits with surfboard in hand. Just a blast. I’m a city boy, I’ve lived in the city centre all my life, so I’m addicted to cities. I liked it a lot. I would move to San Sebastian in a heartbeat.

How do we rate San Sebastian?

If I can rate San Sebastián, for me it ranks among the top seaside towns in Spain. Personally, I liked San Sebastián a lot more than Barcelona, which is overrun with tourists, and they want to sell you something from every side. I felt at home in San Sebastian. Not to mention the fact that you can surf right there in the city.

A map of the attractions: