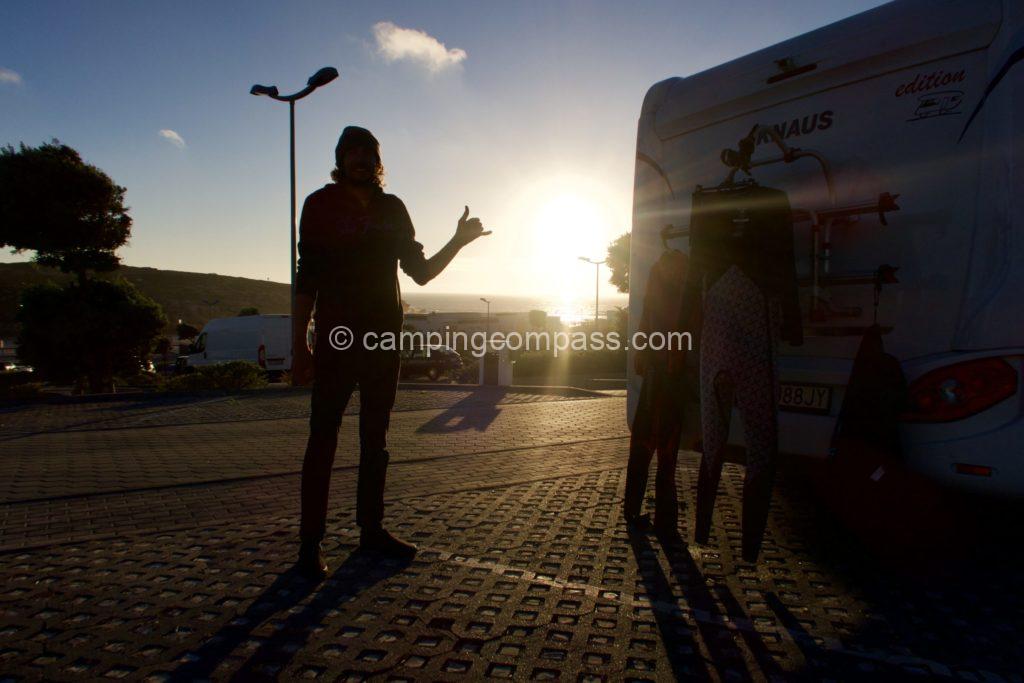 We were in Portugal for more than one month in 2017. The main goal was surfing on Portuguese beaches and exploring the ocean coast. I had never been to Portugal before, Ema had been to Porto when she was in college. When you say surfing in Europe, everyone just thinks of Portugal

Going by van to surf in Portugal is a dream for a lot of people in Western Europe. Especially Germans, Austrians and Swiss. The trend hasn’t come to us yet, but like caravanning, it’s a bit late but it will eventually break out. In this article I will try to describe the most popular surf spots we have been to most often. What were our impressions of these surf beaches and spots, and whether we recommend them or not

I was a surfing beginner at the time, and that guided the choice of beaches we went to. I think this article will be helpful for people who would like to try surfing in Portugal. I will therefore also write information about what the services are like in that place. You can surf in Portugal at about a thousand different beaches. However, if you’re a beginner, it’s quite sensible to go to a beach where there are more people, in case you need help.

Where to sleep in a van or caravan

In 2017 we slept in parking lots right on the beach with other surfers. It was a pretty cool experience. Most of the time there is water and toilets available on the beach. However, as of 2021 this is no longer possible, you need to go to a campsite

Caravan service can also be arranged at almost every big Intermarché department store. They even have outdoor laundry facilities there. For your purchase you get a token to fill and drain the water in the caravan. In addition to water, you could also fill up with petrol or diesel. Portugal was really a paradise for campers at that time. When you were out of town, it was kind of the South America of Europe. Too bad they banned it.

Peniche is a small town on an outcrop roughly 100km north of Lisbon. There are surf shops and surf schools in the town. It’s not just a tourist “attraction”, people normally live there, there are restaurants, bars and shops. You can easily just go to Peniche and surf almost every day, without having to travel anywhere far. There are beaches nearby suitable for beginners, but also for the organization of the World Cup (Supertubos). So it’s an ideal place for a larger group of people, there’s something for everyone.

Quite a nice little town just 50km from Lisbon with a small historic centre. There are bars and restaurants in the centre. You can find surf schools and shops. Also you need to shop, stop by the Boardriders Quiksilver store. They will definitely have your size of everything. The store also has an outdoor skatepark with a bowl. Again, the beaches around Ericeira are full of beaches for different levels of surfing.

Probably the most popular hippie beach with pretty OK surf for beginners, huge parking lot, surfboard rental, surf school, bar and restaurant. At night there was absolutely no one there except van surfers, it’s completely outside the village where people live. It wasn’t even lit at night. If you wanted to go by van to live on the beach for a week, you went to Praia do Amado.

During the day there’s a lot of surf schools, but by the beach being huge, you’re bound to catch your wave.

Nice beach for beginners with pretty OK surf. You have to walk down to the beach from the parking lot about 15 minutes or pay for a golf cart. I write more about it in this special article.

A small tourist town in the very south of the Algarve. Apart from tourists, very few people live there. There is no surfing directly in the town, you need to go to the various beaches in the area by car. There are restaurants, bars and a small skatepark in town. It’s not exactly a town where you want to be on holiday for a week, but as a stop for a beer and fish if the waves don’t go it’s OK.