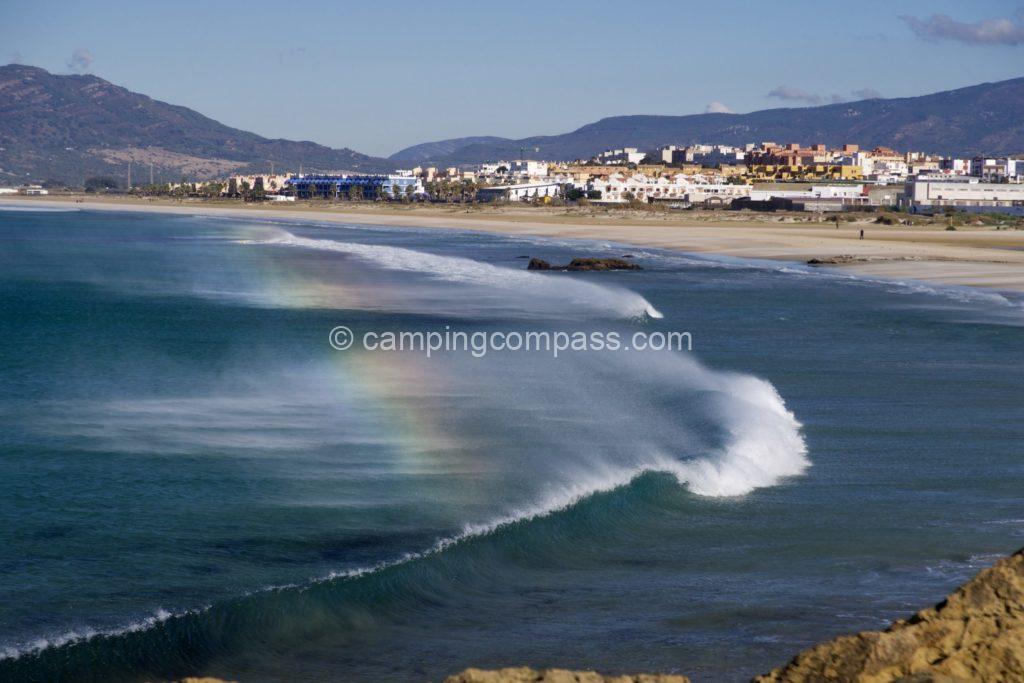 Tarifa is the southernmost point of continental Europe. It is only 32km to the port of Tangier in Morocco. Tarifa is a popular town where mainly windsurfers and kitesurfers travel. There is almost always a regular wind in Tarifa and the climate is pleasant all year round. We went to Tarifa full of expectations as we had heard a lot about it. We are neither kiters nor windsurfers. If, like us, you are not close to those sports, this review is just for you.

Where we slept and parked the caravan

The area around Tarifa doesn’t look very welcoming. The houses are rather so shabby. Tarifa reminded us quite a bit of Barbate, which is about halfway between Tarifa and Cadiz. We’ve been to Barbate about twice, but we’ve never slept there. They have a huge problem with drugs, smugglers and immigrants.

The centre of Tarifa is quite tiny. It has a lot of narrow streets and, like Cadiz, they have their work cut out by the constant wind. We felt at ease there. Since it was almost the end of October, there weren’t extra tourists either. Even the kitesurfers were somehow less, I don’t know why as it was blowing constantly.

The beaches are huge sandy areas with smaller waves. I didn’t see anyone surfing the waves there, but I’m not surprised. Who would want to sit on the water in that wind. There is a bike path that runs along the beach, which you can also longboard or skate along without any problems. There are beach bars and restaurants along the beaches. Everything as it should be.

There is one small skatepark in the centre of town, but I never saw anyone there. There used to be a longboarding competition in Tarifa called “Dance with me”, there is a pretty good spot for longboard dancing near the beaches. I marked this place on the map.

How Tarifa impressed us

Since we don’t do any sports that require wind, I’d probably go somewhere else for a vacation. However, we will definitely return to Tarifa in the future. On the way to Morocco.

The food is clearly marked by the proximity to Morocco. It smells of spices everywhere and you can find restaurants with Moroccan food. It’s definitely worth a try. The food in the restaurants is otherwise quite cheap, cheaper than at home.

What to keep in mind when travelling to Tarifa?

This is a very important chapter. We left our passports at home when we went on our four-month trip. It’s a great pity, because we would definitely have gone to Morocco as well. It is possible to either go to Morocco by boat along with the caravan, or just run out there for a 1 or 2 day trip without the caravan. Importing a car to Morocco is a bit more complicated than just going there in person.