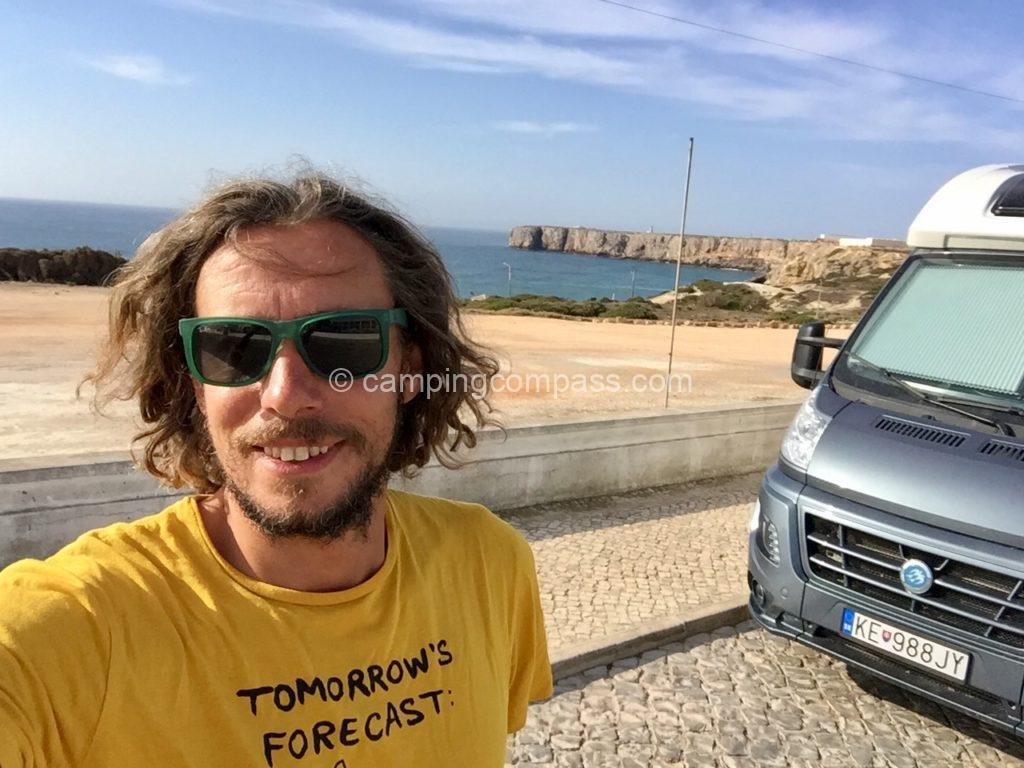 Also, the consumption of a caravan won’t be like a Fabia, expect the caravan to guzzle 12 litres in a headwind on the motorway. Yes, that’s also why all German pensioners drive 90 everywhere.

Most of the time you think of a campsite as a crooked meadow. Partly mown, partly mowed, but in any case a meadow downhill. The bathrooms are from a previous regime and you wouldn’t want to shower in a shower or a bike. Unfortunately this is the reality of pretty much all campsites in Eastern Europe. Fortunately, there are campsites here that have been taken under the thumb of some long-time caravanner who has been elsewhere than V4rka.

“Quite a lot of campsites are still not ready for caravans”

They don’t have a dedicated place to pump drinking water and drain the caravan waste water, not even a place to pour a chemical toilet.

There are campsites abroad that are of a pretty decent standard and usually with a very good site. They are marked with stars like hotels. A 2 star campsite like this is roughly equivalent to an Eastern European campsite that has already had some refreshing. So it has quite usable toilets.

Three star campsites are great. They offer a pretty nice environment to spend time in camping. The pitches at the campsite are well maintained and the environment is quite nice.

Four-star campsites often have a very nicely landscaped environment and often have services such as an aqua park, animators or a capable bar and restaurant. Each caravan has its own physically defined site, a pitch. Depending on the location or the size of the pitch, the price also depends. A pitch right by the sea is more expensive than one that is further away.

Nowadays, all the information is on the internet or on mobile apps. You can see reviews or even real photos from people who have visited the campsite. If you want to spend your vacation by literally staying in one campsite for 2 weeks, make sure you choose a 4 star campsite. If you just need somewhere safe to fold up and spend all your time somewhere around, a 2 star will do.

“Almost every campsite abroad will let you get a service for a small fee even if you’re not sleeping on the campsite.”

The exception proves the rule, it happened to us that they didn’t allow it and sent us away.

The campsite has the possibility to connect to electricity, sometimes for a fee, sometimes included in the daily entrance fee. Some of the better campsites also have water connections and waste outlets right on the pitch. This is great for long term camping, but you have to have a caravan prepped for it.

Some campsites in the Alps have the option of renting or hooking up to their gas cylinders. In some campsites, each pitch has its own bathroom or even a sauna.

You will also find urban campsites that have their own transport to town, for example by bus. So if you want to safely explore some of the metropolises, I can only recommend a campsite. You can wander around the city in peace and you don’t have to worry about your bike being stolen.

How do I get to the campsite and hook everything up there? This is probably the most common question people ask me.

Today’s caravans are modern and self-sufficient. You basically don’t need anything. Water will last you a few days, so will electricity or gas. But everything still depends on your consumption or saving.

So you can spend the night in the caravan even outside the campsite. Not everywhere it is suitable and safe. It is therefore ideal to have a dog in the caravan.

In general, however, where it is not forbidden, it is allowed. In the more caravan-friendly parts of Europe, there are services ready for caravanners in the form of reserved parking or places to fill and drain water and the possibility of being connected to electricity.

Many times such sites are in good locations, are free and are managed either by a private party or by the city. What is in it for the municipality or the private party? It attracts caravanners who go there to have a beer, buy something in the shop or go to a restaurant.

In big cities with a high probability of being burgled, such sites are paid for and guarded. It is important to understand that caravan parks are not campsites and it is usually not possible to pitch an awning or sit outside the caravan. However, this also depends on the country in which the car park is located, local laws and restrictions. When you travel, you are the visitor and you have to adapt to the local rules.

Such caravan parks will most likely work here one day. For example, if you are the owner of a restaurant or a hut, try to think about what such a service would do for caravanners.

So you may not even visit a campsite once during your roadtrip. Official caravan parks are quite sufficient. The Germans call them Stellplatz, the Italians Area di Sosta, the French Aire.

If there are no dedicated caravan parks in the area you’re in, you can sleep in an ordinary caravan park. Ideally, it should be flat, otherwise you won’t get any sleep and your spaghetti and ketchup will slide off the table.

You need to check the surrounding area and see if there are any parking bans for caravans in the area. Such bans have recently started to appear in some places. This is due to inappropriate behaviour by caravanners who mistake a car park for a campsite. They set up a table, chairs, an awning, or park across several parking spaces. So you need not be surprised that the locals find this annoying and deal with it with bans.

“A car park is not a campsite”

If there is no ban in the car park or area, you can park your caravan or van in the car park and sleep in it. Ideally, you should only stay on the site for one or two days at most and not stay there for a week.

The ban on caravans also applies to small vans, and it’s common for police officers to come to such a car park at night and hand out fines even if you’re sleeping in a VW T4.

Behave yourself or there will be even more bans.

Sleeping outside the campsite carries some risks. The biggest risk is getting burgled. A caravan can be burgled if you’re not in it, but also if you’re sleeping. More often than not, you will be pumped with narcotic gas into the cabin at night and wake up after a while with a huge headache.

How to prevent such a robbery? The best way is to sleep in a safe place. We tend to sleep in the center of town or village in the square in front of the church, rather than somewhere dark on the outskirts where you’ll find out in the morning that you’re on 90210

Special care should be taken along the Mediterranean coast in France and Spain. It’s definitely worth going there to a campsite or guarded caravan park.

I recommend everyone to install a gas detector. It’s a device that audibly signals the detection of gas. If you happen to have a gas leak in your caravan or someone tries to rob you, a loud siren will go off and you’ll definitely wake up. Such a detector costs up to 100 euros and you have peace of mind.

There are also alarms for the garage or for bicycles, which you have attached to a rack behind the caravan.

A safe is also an excellent thing. Safes can be bought directly for a certain model of caravan. They are mounted in the interior in places where they are attached directly to the body. They are of different sizes. From a small one that you just put your documents in to a huge one that can fit laptops and tablets.

Most caravans or camper vans can be opened by anyone. The front is a regular Ducato and the back is made of polystyrene. The locks on the caravans are like a treasure chest for kids. The good news is that there are additional locks that can be fitted to the caravan. Clearly the best locks are from HEOSolution. You can order kits for the front door, the side caravan door and the garage with one security key. The front door locks from the inside. So no one can open them from the outside, even if they unlock the outside lock.

Ideally, a GPS/GSM alarm should also be installed in the caravan, which is triggered, for example, if someone enters the caravan or forcibly opens the garage door. It is better to wake up the whole street than to lose your bike. The GSM alarm will send you a text message or call your mobile in case of any problem with the caravan.