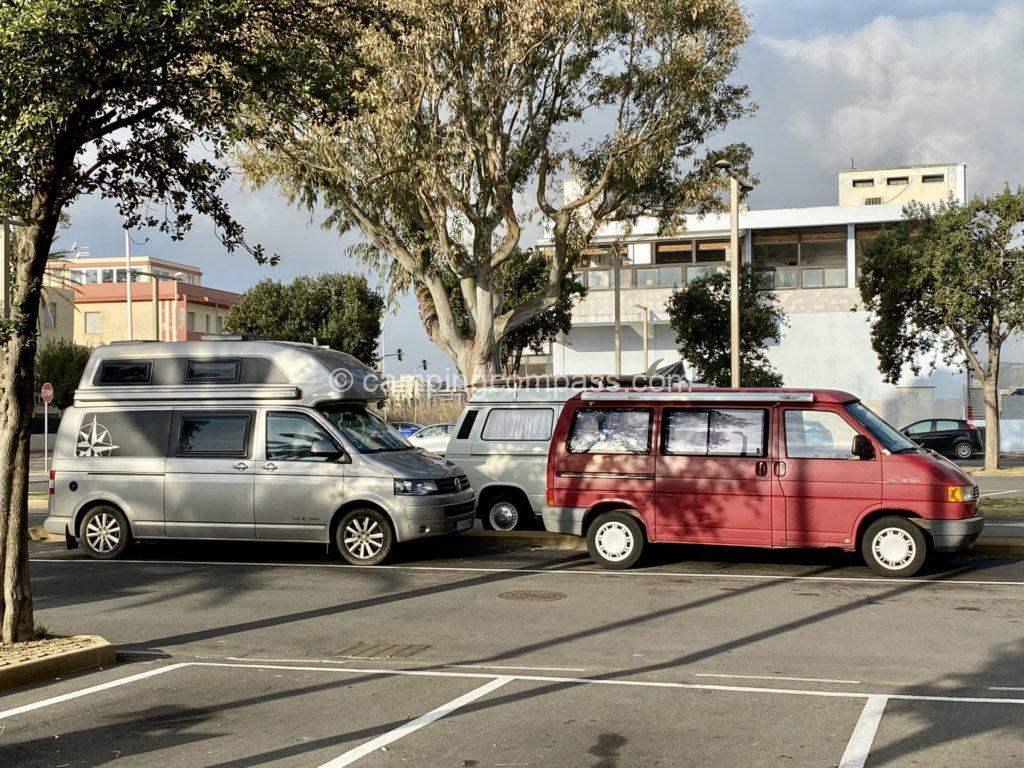 I often come across the opinion that a van for camping without a campsite should be as secretive as possible. In my opinion and experience this is not necessary at all. If you park a big white van with basketball signs somewhere in the centre of Nice, you’re bound to get just as much screaming as if you parked with a campervan

Think also that all you have to do is mount a sunroof with a solar panel on the van and everyone who wants to notice you will notice you.

If there’s no ban somewhere, I don’t see why you can’t park there. We’ve never had anyone ever send us away from somewhere. We park in city centres all the time, but we still respect the bans.

A van for living without a campsite should have at least one extra thing, unlike a camper van – a chemical toilet

“If you want to be able to continue to enjoy the freedom of not camping, use a chemical toilet”

People in converted vans are steadily increasing. The catastrophic situation has forced the Portuguese to completely ban sleeping in caravans or vans outside campsites or official car parks. If we don’t want to end up like this all over Europe, use chemical toilets

A good quality Portapotti takes up little space and can be bought new over the Internet from as little as €60. I think anyone can manage this investment. The chemical toilet can be poured free of charge at any service point or caravan park. In Italy there is such a place at almost every petrol station on the motorway

If you don’t want to pour chemistry into the chemical toilet, plain vinegar will do. I think you have absolutely no excuse now.

A shower, unlike a toilet, isn’t necessary in a van at all. There are plenty of places to shower when travelling and showering is not so acute

A pressure shower from Decathlon works great too. If you fill it with warm water heated on gas, you can take a shower after surfing even in cold weather. Decathlon also sells a folding shower.

If you want to shower directly in the van and don’t want to make a permanent shower in it, there’s an alternative from Spanish company Thais. You can also make a shower in a small campervan like the VW California.

“When showering in nature, use only natural, plant-based shower soaps and shampoos that are 100% harmless”

The water system in small campervans and converted vans usually works on the same but somewhat simplified system as in large motorhomes. The water from the drinking water flask is pumped through the sink into the waste water flask using a pump. A very simple system that is also used by commercial campervans such as the Pössl Campster or the aforementioned Maxx-Camp.

“Also, use only eco-friendly 100% natural products for washing dishes. Apart from nature, they are quite gentle on the hands”

All the components of this system can be bought from the caravan shop, including the drinking and waste water flasks, the sink, the battery and the pump.

The pump usually runs on 12v, there are also quite simple hand pumps. However, with the price of the 12 volt one, I probably wouldn’t tackle the manual ones. An interesting improvement is to start the pump with a button on the ground, i.e. with your foot. It saves a lot of water.

You have two options for cooking. Either you use Campingaz bombs, which is an extremely simple and practical but expensive solution

The other option is to run gas from the gas bomb to the cooker. This cooker can be built right into some worktop, or it will be removable and you’ll store it in a cupboard somewhere.

You can use either an internationally replaceable Campingaz gas bomb or your local one, but you can’t replace it anywhere. So if you’re going to be travelling for longer, use Campingaz. The gas will last you about 5-6 weeks when you’re actively cooking spaghetti and ketchup.

Refrigerator only with a 12V compressor. It works fantastically, and there are absolutely no worries with it. Do not under any circumstances consider a triple combination of Gas, 12V, 230V. It’s a lot of hassle and the gas fridge stinks. End of story.

Make sure you at least do a simple electrical system. By simple I mean at least one residential torch that you connect the fridge, water pump and lights to.

A residential flashlight is quite good to charge the engine while driving with, for example, a booster. You can find out more about boosters in the article on caravan accessories. If your van is a EURO 6, you can’t charge a residential torch with anything other than a booster to reduce emissions.

A solar panel is also not to be thrown away, if you want to operate off-grid, make sure you at least buy a portable one that you can put next to the van.

If you want to use your van four seasons of the year, make sure you get a diesel heater fitted. The van has a small space overall, and you’ll be perfectly happy with a weaker hot-air heater that’s connected to a residential torch. You’ll dry out wet stuff without any problems and sleep comfortably in autumn, spring and winter.

Don’t forget that if you want to put the waste tank under the car, you’ll need to heat it in winter. Therefore, it is ideal to place both bins in the heated part of the van.